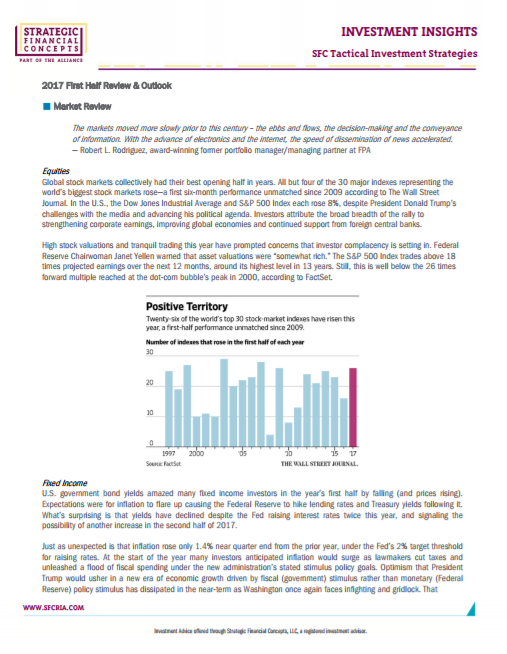 Global stock markets collectively had their best opening half in years. All but four of the 30 major indexes representing the world’s biggest stock markets rose—a first six-month performance unmatched since 2009 according to The Wall Street Journal. In the U.S., the Dow Jones Industrial Average and S&P 500 Index each rose 8%, despite President Donald Trump’s challenges with the media and advancing his political agenda. Investors attribute the broad breadth of the rally to strengthening corporate earnings, improving global economies and continued support from foreign central banks. High stock valuations and tranquil trading this year have prompted concerns that investor complacency is setting in. Federal Reserve Chairwoman Janet Yellen warned that asset valuations were “somewhat rich.” The S&P 500 Index trades above 18 times projected earnings over the next 12 months, around its highest level in 13 years. Still, this is well below the 26 times forward multiple reached at the dot-com bubble’s peak in 2000, according to FactSet.